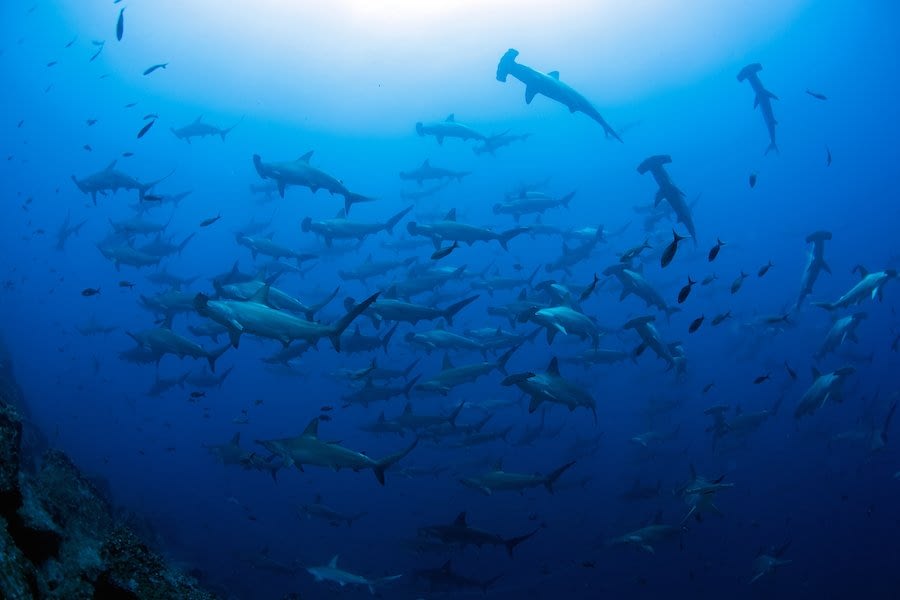 Manolo Yépez has fished off Ecuador’s Galápagos Islands since he was 16, choosing the same livelihood as his father and grandfather before him. For a time in his 20s, he engaged in illegal fishing, targeting ostensibly protected sharks and sea cucumbers and delivering them by boat at night to Asian fishing crews “as drug traffickers do.” But since then he has been scrupulous about using sustainable methods, fishing only for the species—and in the specified periods—allowed in the Galápagos Marine Reserve, a vast conservation zone around the archipelago.

Now 42, Yépez says he has become far more mindful of the need to protect Galápagos marine life. That’s thanks in part to unpaid work he has done to help scientists monitor archipelago waters for microplastic waste, the tiny particles that are now a major source of ocean pollution. It also has to do with a small tourism business he runs in addition to fishing. These days, he says, he supports stepped-up conservation, including a proposal to more than triple the size of the marine reserve.

“I am part of the change, and I support the reserve expansion proposal and other steps that will allow the Galápagos to continue as the paradise it is, not only for Galapagueños and Ecuadorians, but for the entire world,” Yépez says.

The waters of the volcanic Galápagos chain, located 1,000 kilometers (620 miles) off mainland Ecuador, support a profusion of marine life. That’s largely due to upwellings of nutrients that occur as portions of the deep, cold-water Cromwell Current, which flows west to east, are forced toward the surface by the archipelago’s undersea formations. They then mix with the waters of the north-flowing Humboldt Current as well as with warm-water flows from the north.

The reserve’s extraordinary variety of rich marine habitats—a result of the archipelago’s unique biological and geological conditions—support a stunning array of animals ranging from marine iguanas to sharks. Many are the focus of conservation concern, including the Galápagos sea lion (Zalophus wollebaeki) and green turtle (Chelonia mydas), both listed as endangered by the International Union for Conservation of Nature (IUCN), and the waved albatross (Phoebastria irrorata) and Galápagos petrel (Pterodroma phaeopygia), which are listed as critically endangered.

The reserve was established in 1998 amid escalating industrial fishing, unregulated growth of near-shore artisanal fishing, booming tourism and an expanding year-round human population on the archipelago. It covers 133,000 square kilometers (51,400 sq. miles), which originally made it the world’s second largest marine protected area, though it now ranks 33rd. Only local artisanal fishers are allowed to operate in the reserve, which includes all near-shore waters and extends 40 nautical miles off the archipelago. Ecuadorian commercial fishing vessels are not allowed to operate in the reserve, and foreign boats are not permitted to fish within the 200-nautical mile Exclusive Economic Zone Ecuador maintains around the islands.

Conservationists are urging Ecuador’s government to expand the reserve by 445,953 square kilometers (172,183 sq. miles), saying the move is needed to sustain the critical ecosystems, migratory routes and foraging areas of Galápagos marine species. The proposal was formulated by More Galápagos, or Más Galápagos, a citizens’ collective that includes scientists, national and international nongovernmental groups, tourism entrepreneurs and more. Presented originally to the government of former President Lenín Moreno, it is expected to be resubmitted in the coming months to Moreno’s successor, Guillermo Lasso, who took office on May 24.

If the government seriously entertains the plan, it’s likely multiple stakeholders will be called on to scrutinize key components—including the recommended scale of the expansion. Says Danny Rueda, director of Galápagos National Park: “How much it is expanded is a decision that should be discussed by all sectors to adopt a strategic model that benefits all actors.”

But proponents argue that while the reserve has provided important protection over the years, a far larger conservation footprint is needed to help safeguard the islands’ ecosystems and marine life—particularly those species that forage far from shore and migrate to other areas of the Eastern Tropical Pacific.

The plan reflects growing consensus among conservationists on the need to create, expand and connect marine protected areas in order to properly safeguard the world’s oceans. (See “Big expansion of Panama ocean reserve is decreed” and “Peru creates its first marine protected area” in Around the Region—this issue.)

“Ecuador has one of the jewels of the entire planet, and this jewel deserves expansion of the reserve to give it the highest level of brilliance it is capable of,” says Maximiliano Bello, a Chilean oceans-policy advisor to Mission Blue, a U.S. nonprofit that promotes marine conservation worldwide. “[This] will allow species that are in danger to flourish, move in complete freedom and accompany us into the future for the good of the Galápagos and the world.”

Experts say climate change and relentless industrial fishing in the Eastern Tropical Pacific are ratcheting up pressure on marine species. Pollutants throughout the water column are exacerbating the problem, with plastic contamination ranging from microbeads to discarded shopping bags increasingly prevalent. Some researchers forecast that if current trends continue, the volume of plastics flowing into the world’s oceans could triple over the next two decades, a volume they worry could devastate marine species and the livelihoods of coastal communities. The trend is apparent on the Galápagos Islands, as isolated and relatively well conserved as they are. Two years ago, Bello and a team from Mission Blue found microplastics at depths greater than 25 meters (82 feet) off the Galápagos island of Darwin, which is some 300 kilometers (185 miles) north of main islands of the Galápagos chain.

Experts say that if it goes unchecked, plastic pollution could have important ecological consequences for the Galápagos and take a major economic toll on the archipelago’s economy, of which 80% is rooted in tourism. Scientists say plastic waste is a particular problem for the waved albatross and Galápagos petrel, which fly from the islands to feed in the waters of the Humboldt Current. Not only can they ingest floating plastic; they can also get caught in fishing gear set outside the reserve, according to a study by the University of Exeter, Galápagos Conservation Trust and Galápagos Science Center.

The study examined the marine habitats of one of the principal islands of the Galápagos chain, San Cristóbal, and found that all of them contain plastic contaminants, with the heaviest concentrations on the eastern shores bordering the Humboldt Current. Those shores include Punta Pitt—home of the endemic Godzilla marine iguana subspecies (Amblyrhynchus cristatus godzilla), which is believed to number no more than 500.

Yépez, who has taken part in monitoring near the island, says the presence of plastic has increased markedly in recent years on San Cristóbal, which lies about 160 kilometers (100 miles) east of Isabela, the chain’s largest island.

“The ocean current from the south brings plastic waste to San Cristóbal, with the most affected area being the southern portion [of the island],” he says. “Plastic comes from everywhere, and in the last two years we’ve seen greater impacts from the Chinese fleets that fish [in South America’s Pacific waters] for squid and other species.”

Waste linked to these fleets, which typically comprise hundreds of vessels, includes Chinese-labeled bait packaging; oil containers; water, soft-drink and shampoo bottles; soap wrapping; and bags. Says Yépez: “All the plastic they dump easily reaches the coast of the Galápagos.”

Marine species are coming under pressure not only because fishing fleets have grown larger in response to rising consumer demand, but because the fleets have simultaneously become higher-tech and less discriminating.

“Currently more advanced fishing technology is being used, driving down [fish] populations, and at the same time they are catching smaller-sized fish that have not reached reproductive age,” says Mónica Calvopiña, a biologist and a member of the More Galápagos collective.

Former Galápagos National Park Director Walter Bustos agrees that fishing technology today has advanced far beyond where it was when the Galápagos reserve was established. Says Bustos: “Fishing is now done with satellite technology, so the fishing volume is steadily growing, and it exerts a great deal of pressure on the marine reserve.”

Research shows conservation restrictions maintained under the 23-year-old Galápagos Marine Reserve have benefited commercial and protected marine species on and around the islands. But a study drafted by marine scientists to make the case for expansion of the marine reserve, “New Challenges for Marine Conservation in the 21st Century,” says illegal fishing within the protected zone by Ecuadorian vessels remains a significant problem. Enforcement officials intercepted 136 of these vessels from 2018 to 2020, according to Galápagos National Park figures that were cited in the study.

Foreign fishing boats have illegally entered the reserve, too. In 2017, the Ecuadorian Navy seized a Chinese transshipment vessel carrying 300 tons of shark and other fish. Among the shark species found in the hold were scalloped hammerheads (Sphyrna lewini), which IUCN currently lists as critically endangered. (See «Shark-laden Chinese ship seized near Galápagos» —EcoAméricas, August 2017.) Since 2017, huge fleets of Chinese fishing boats and support vessels arrive just outside the Exclusive Economic Zone of the Galápagos to fish for squid (Dosidicus gigas) from June to September. Last year the fleet numbered some 340 vessels.

The proposal to expand the reserve reflects the view that protected areas must collectively safeguard marine ecosystems at a time of mounting environmental threats. Scientists say the larger protected zone is designed to encompass the routes of marine animals that swim or fly beyond the current reserve to forage or migration sites.

The U.N. Intergovernmental Panel on Climate Change forecasts that the productivity of fisheries in Ecuador’s coastal waters will decline to a greater extent than those farther offshore. Particularly resilient, the panel says, will be the region near the Galápagos where the Humboldt and Cromwell currents mix.

“This probably will cause an incremental increase in fishing pressure around the Galápagos by fleets that have fished in other places,” says Alex Hearn, a marine fisheries ecologist at the Galápagos Science Center, an institute operated jointly on the Galápagos by the Universidad San Francisco de Quito and the University of North Carolina. Adds Hearn, a leader of the reserve-expansion initiative: “That behavior is already evident in the massive presence of foreign fleets around the [Galápagos] reserve.”

Proponents of the reserve plan say that if implemented, the expansion would effectively safeguard 90% and 76% of the migratory routes, respectively, of the region’s scalloped hammerheads and whale sharks (Rhincodon typus); 91% of the foraging area of the waved albatross; and 77% of the critical habitat of the leatherback sea turtle (Dermochelys coriacea).

Aside from expanding the reserve, the plan would designate two “responsible fishing zones” where Ecuadorian commercial fishing vessels could operate on condition they adopt practices such as regular monitoring and bycatch reduction to steward fish stocks. An “El Niño buffer zone” sits just inside the bigger of the two fishing zones to the west of the archipelago. There, fishing would be allowed but could be halted when changes in ocean currents caused by the El Niño weather pattern force species to range farther for food.

The goal, Hearn says, is to ensure the long-term health of the fisheries and associated marine life. He asserts that an expanded Galápagos Marine Reserve and a management plan drafted to steward it could make the Galápagos a world model of biodiversity conservation.

“Charles Darwin’s research and his theory of evolution helped us understand our place in the world and the universe,” he says. “The Galápagos have a very good level of conservation, with some sites almost pristine, and the [local] community is learning to live within the limits imposed by conservation… That is a mirror for humanity, which is learning that we have only one planet. Maybe we can export the things that work on the Galápagos to other places. If on the Galápagos we do well, we can be source of hope for the rest of the world.” 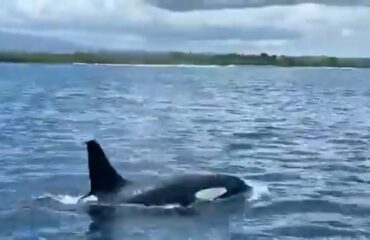 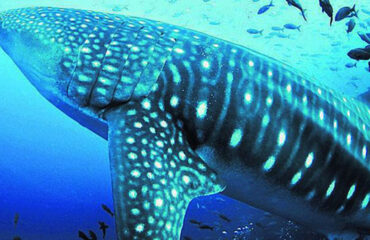